Skip to Main Content
Back to Acrobatic adagio Duo

Warning: Do you believe that it’s possible to actually die laughing? If so, Dizzy might be the most dangerous man alive. From the celebrated Apollo Theatre in London’s West End to the iconic Sydney Opera House, Darren “Dizzy” Partridge has been delighting audiences around the globe for more than a decade. An accomplished comedy magician and cirque variety performer, Dizzy is a regular headlining act on the luxury liners of both Celebrity and Norwegian cruise lines. He has also been featured as The Trickster in the largest touring magic show in the world, The Illusionists. Dizzy’s wild combination of magic, physical comedy, and theatrical thievery, delivered with mischievous British charm, leaves his audiences both spellbound and gasping for breath. With three different shows to choose from, your student body is guaranteed an experience they will not believe and will never forget.
Credits include: The Illusionists – Live from Broadway, the celebrated Apollo Theatre in London’s West End, Masters of Magic, the Dolby Theatre (Home of the Oscars), and the Sydney Opera House.

My name is Darren Partridge, aka Dizzy. I’m originally from a tropical country known as England. I now live in Florida, USA. I’m a comedy magician, mentalist, and pickpocket. I built my confidence and reputation performing various roles in circuses and magic shows around the globe. I have literally traveled the world being comedic relief, a master of ceremonies, and a physical comedian. From an early age I excelled in theatre studies. Between the age of 18-24, my career was focused on children’s outreach and community youth work. This experience opened doors to be a police officer, but instead I followed my mother’s dream, packed up my bags and ran away with a circus! Unequivocally, this was my turning point. Since then I have performed literally thousands of shows around the globe. My unique blend of magic, physical comedy, and circus tricks sets me far apart from the average cirque artist, comedian, or magician.

Are looking for that WOW factor?  Let me help make your next special event an absolute success by giving your guests an experience unlike anything that they have ever seen before. Guaranteed!

Does your show have any message? Yes. Communicated very subtlety using comedy moments: The importance of time and that anything is possible!

How long is your show? Whether you need 20 minutes or a few hours, I’m always excited to trick and entertain a new audience.

How much time do you need to set up, before an audience? Give me a few minutes to find a power outlet and that’s it! But for a bigger production, I need time to program and check a few lights, and test cameras. Then it’s time to let the audience roll on in!

Where don’t you perform? Funerals.

What makes you different from other similar performers? My unique blend of magic, physical comedy, and circus tricks sets me far apart from the average performer!

Do you have anything unique to offer? Absolutely! A mixture of fast-paced cirque variety skills & hilarious physical comedy always captivates kids and adults alike!

Do you Customize Performances? No matter the audience, from kiddie birthday bashes to bachelorette parties, I’ve got special routines worked out for all kinds of gatherings and events.

Do you do Private Events? Well, sure I do! Private events come in all kinds of shapes and sizes, but my extensive (and exhaustive) experience enables me to rock out each and every one, no exceptions.

SHOWS/MEDIA
Countless audiences have been enraptured by the side-splitting comedy and mind-boggling mysticism of Magic & Mayhem. Watch Dizzy bend reality as easy as he wields his mischievous charm with sleight-of-hand, mentalism, pick pocketing, and audacious audience interactions.
Warning: Hilarity ensues… 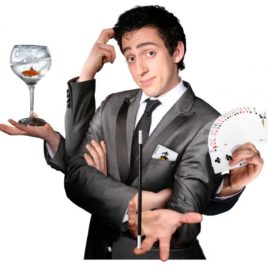 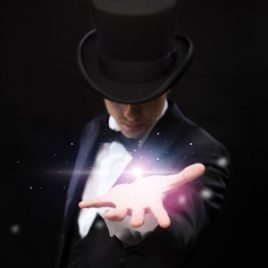 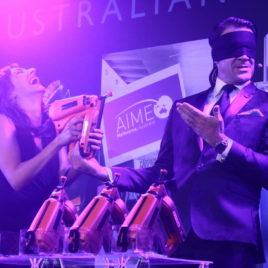